As part of activities marking his first year in office, the Governor of Lagos State, Mr. Babajide Sanwo-Olu today honoured ten frontline health workers who have distinguished themselves in the service of State especially during the on-going war against COVID19 pandemic.

Amongst those honoured are;Prof Sunday Omilabu, an internationally renowned virologist, Principal Investigator at the Lagos State Biobank and Director, Centre for Human and Zoonotic Virology, College of Medicine University of Lagos; Dr Sunday Adesola, a Principal Medical Officer, who has contributed immensely to case management of COVID 19 at the Isolation Centre of Mainland Hospital Yaba and deployed to head the Onikan Isolation Centre and Mrs Basirat Adeoye, the Apex Nurse at Mainland Hospital Yaba,

Others are, Mr. Folarin Amosun, a pharmacist from Lagos State Ministry of Health who has demonstrated immense logistics skills in managing the COVID 19 stores and ensuring an uninterrupted supply chain;Mr Olufemi Akinade, a hygienist/medical waste cleaner; Dr Bisola Adebayo, a Consultant Public Health & Community Medicine Physician and Lecturer at LASUTH/LASUCOM who has been coordinating contact tracing, case investigation and active case search; Mr Olanrewaju Aladetuyi, a laboratory scientist, known to carry out highest manual extraction of samples (250) as part of RT-PCR for COVID 19;Mrs Abiola Aduloju, the administrator of Mainland Hospital Yaba; Mr Alaba Anago, an ambulance driver and Mr Tajudeen Bankole, one of the gateman/security officer at the Mainland Hospital Yaba.

In his remarks before the presentation of award plaques to the health workers, Governor Sanwo-Olu said the government of Lagos will not wait till the eradication of COVID-19 before acknowledging the effort and contribution of the health workers who he described as unsung heroes battling the global pandemic on behalf of other citizens. He noted that the last one hundred days would have been chaotic if not for the dedication and sacrifices made by the health workers.

“The ten of you here today are by no means the only people deserving of the honour but this is just a show of our appreciation for the effort you have put in so far. We are not out of it yet, but as we go along, they say delay is denial; we certainly cannot wait till it is over before we begin to acknowledge our own (frontline health workers). That is why we are excited that your principals looked around and picked you for this honours”.

He added that the ten awardees stand in gap for other cadre of health workers at the frontline at the primary, secondary and tertiary health facilities as well as the isolation centres across the State noting that all of them are deserving of “our appreciation and commendation”. Sanwo-Olu noted that the dedication of the health workers has increased their workload especially at a difficult and trying time such as this.

Governor Sanwo-Olu admitted that though more needed to be done to revive the economy, he gave an assurance that the lessons being learnt from the pandemic would be employed in developing the State post COVID19

“It is not only about COVID19, this is about the whole health structure, about what we need to do and what we can learn from the COVID19 pandemic and beyond”, he said

Earlier in his remarks, the Commissioner for Health, Prof. Akin Abayomi noted that a ceremony to honour health workers in commemoration of the first anniversary of Governor Sanwo-Olu’s administration is commendable and a morale booster for State health fraternity.

He stated that the Governor has once again demonstrated exemplary leadership as the Incident Commander of the COVID19 battle in Lagos and as a team player who appreciates the efforts of other team members to achieve the desired result.

Abayomi added that the Governor has demonstrated his leadership skills by leading from the fore front, visiting intervention and treatment sites and supporting all the noble initiative of the Incident Command System. 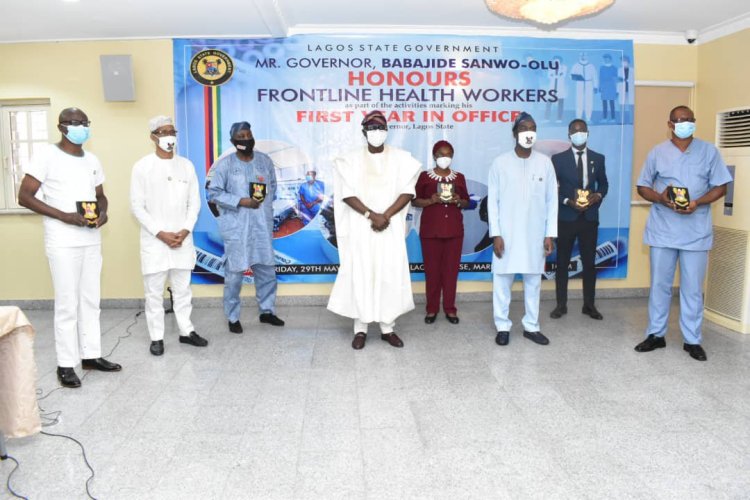