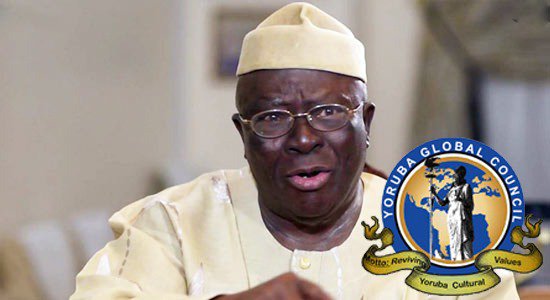 Afenifere leader, Chief Ayo Adebanjo, has maintained that Nigeria may remain a all motion- no movement nation, if her constitution is not reviewed before the 2023 general election, declaring that ”if my son emerges as a Presidential candidate of any political Party, I will not support him if Nigeria is not restructured.’

The socio-cultural group’s chieftain said this during a biweekly meeting of Yoruba Global Council, a body of progressive Yoruba sons and daughters at home and in the diaspora tagged “The Platform”.

The body which seeks respect and good placement for Yoruba nation in Nigeria project, also drew accolades from chief Adebanjo who commended the body for bringing themselves globally to promote unity as well as protect the interests of Yoruba sons and daughters home and abroad.

Professor Lere Amusan, the Spokesperson of Yoruba Global Council had highlighted the missions and vision of the group to Chief Ayo Adebanjo to include the restructuring of Nigeria which can only be a palliative measure to solve many pressing challenges Nigeria is facing today.

”Right now, people are in need of material gains, basic necessities of life, education, health, good roads and hospitals and when these things are fixed due to more wealth redistribution then we will have lesser fights about security, corruption, tribalism and nepotism”. Amusan further mentioned.

Responding, Chief Ayo Adebanjo applauded the missions and the visions of the group, insisting that if Nigeria is not restructured before 2023 election, Nigeria will continue to dwell in the same problem.

According to him, if my son emerges as a Presidential candidate of any political Party, I will not support him if Nigeria is not restructured. The Nigeria constitution is fraudulent and imposed on Nigerians by the military Government.

While speaking with the members of the Yoruba Global Council (YGC), the Yoruba leader maintained that the Buhari Regime had deliberately ignored the restructuring of the country which was part of his central campaign mantra.

Adebanjo, while making reference to the Presidential ambition of Asiwaju Bola Ahmed Tinubu, said he advised Bola Tinubu that before becoming the Presidential flag bearer of the ruling All Progressives Congress (APC), he should, in the first place, negotiate the restructuring of the country. He stated further that their visit to Bola Tinubu when he returned from abroad was not about politics but to pay a solidarity visit to him as a bonafide Yoruba son.

He pointed out further that the national conference recommendation is still there for any government that is sincere with the issue of referendum to work on; saying the excuse of rancour among ethnic nationalities should not be riveted on to dismiss the importance of a national discourse on true federalism.

While accusing the Buhari led government of insincerity, he emphasised that for the country not to be disintegrated further, necessary constitutional actions must apply to appease those that have been sidelined in the scheme of things.

The Afenifere leader also lamented that some All Progressives Congress leaders including Bola Tinubu, Bisi Akande, Olusegun Osoba, amongst others, promised restructuring during the 2015 electioneering but reneged on their promises after the election of President Muhammadu Buhari.

”I implore you to invite Bola Tinubu, Segun Osoba, Bisi Akande and others to this platform as well. Ask them why they derailed, advise them to persuade Mohammadu Buhari to restructure Nigeria before 2023 elections”

The Afenifere leader said that the 1960 Constitution embrace fiscal federalism and encouraged regional autonomy, noting that restructuring is the way forward.

He insisted that the 1999 Constitution foisted on the country by the military is a fraud and there is the need to revisit the law guiding how Nigerians agree to live together.

“How can you say a product of the fraud would amend the fraud?

“They cannot rule us under the rule of the thumb and those of us who fought for democracy will keep quiet? No, it can’t work.

“In 2021, Buhari telling me Nigeria’s constitution is not negotiable? What a balderdash! What an insult! That is not the agreement we made with the founding fathers” Chief Adebanjo fumes.

He thus, advised the members of Yoruba Global Council to be more steadfast, focused and be open minded to one another.